If you follow my Instagram, you may already know my penchant for writing letters to the editor. A topic of particular interest to me is climate change. Apparently it is of interest to others, as whenever I have a letter printed regarding climate change, I receive a phone call from a concerned stranger who is determined to correct my beliefs regarding the Great Global Warming Conspiracy.

The first time this happened, I was equal parts shocked and terrified. The thought of a complete stranger* looking up my number and serving me a lecture merely because I happened to express an opinion was discomfiting. However, I found his complete devotion to his delusion intriguing, and heard him out**, trying to commit as much of the conversation to memory as I could for future story-telling purposes. When he offered to send me an email with proof, I had no problem giving out my junk Hotmail address. At the very least, I would get a laugh out of it.

Oh, you guys. THAT EMAIL. That glorious, glorious email, which contained a PowerPoint display*** of a whole 42 pages of conspiracy theory, wrapped in mystery, wrapped in lots of pictures of Stalin. It was mostly Communist-themed, as you’d expect – climate change being a Communist conspiracy.

It was created by someone who was barely competent with the software, and made up for his lack of skill with enthusiasm. Every special effect was utilised. Words zoomed around the screen, piling up on top of each other, with lots of exclamation marks and arrows for emphasis. Various Communist leaders had cartoon-like comments coming out of their mouths, lending their credibility to my stranger’s arguments. It was a treat.

But what does this have to do with sewing, you may be asking. My story serves as a tenuous segue to my latest make: Burda 7390. Our summers are getting hotter, uncomfortably so. The kind of oppressive heat and humidity usually experienced in Queensland has made its way to southern Victoria, and we locals (myself included) are not built to cope. Hit the shops during or after a heatwave, and all you hear is talk about the heat.

Enter Burda 7390. A “young” pattern (I don’t know what that means, but do I count as young at 27?), it is a basic, two-piece flared dress. Patterns don’t get much simpler than this.

My main adjustment was adding 10cm length and replacing the all-in-one facing with self bias facing to keep things as lightweight as possible. The fabric I used is a rayon from Spotlight, bought from the $2/m clearance table (good god, I hope they have more of those sales). I can’t tell you much more than this, as it is only labelled “rayon” on the bolt – I think it might be challis, but without another fabric to compare it to, I can’t be sure.

So that’s my dress! And whatever happened to my generous, conspiracy-theorist benefactor? Last I heard, he was still spreading the good word. Perhaps a year ago, he rang to enquire after a “Slobham” (that’s S-L-O-B-H-A-M) who wrote a letter to The Age. I cheerily informed him that there was no such person living at this address, and gained an endearing nickname among my friends.

Til next time! Your friend, Slobham. 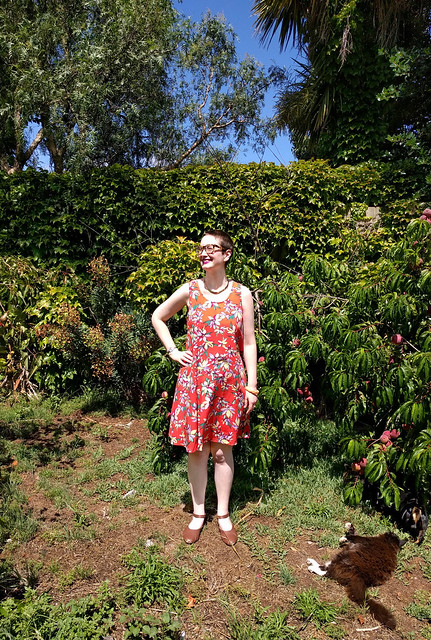 *A middle-aged man, at that.

**This was before Facebook really took off, so conspiracy theorists were mostly hidden in their own corners of the internet. Of course now guys like this are dime a dozen on Facebook, but back then, it was a novelty.

***Obvs I virus scanned the shit out of it before opening.