One of my go-tos when I’m stuck between knitting projects is a hat. They take very little time and yarn to knit, and I can usually squeeze one out from leftover yarn from a cardi or jumper. The yarn in this particular project (Heirloom Easy Care 8ply) was leftover from my Pumpkin Vianne cardigan, and because I’m an unimaginative clod, it’s called Pumpkin Chevrons. 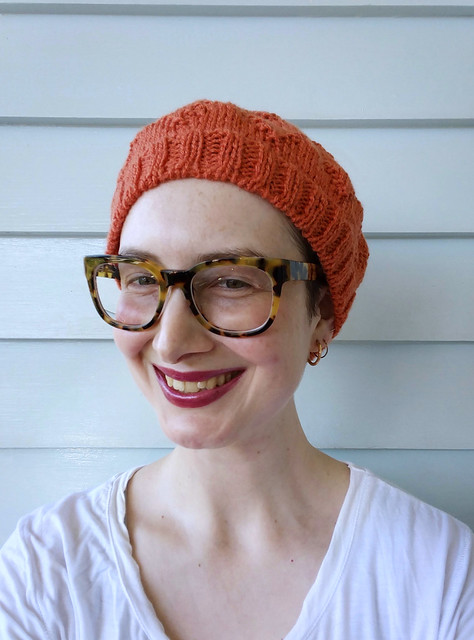 The pattern is the hat from the Audrey Collection by Jessie Roselyn, available free on Fringe Association. Apparently the free version is slightly different to the one you buy, though I’m unsure how. It’s a simple pattern, designed for beginners, which is apparently the reason the pattern is entirely written, not charted. This begs the question – if an advanced knitted such as myself struggles to follow along with the written instructions, what hope does a beginner have? It is much easier to keep in pattern when you can see how it should be forming in a chart.

My version is slightly different to the written pattern – I only worked 2 repeats for a shorter hat, and changed the stitch count / cast on method for the brim. I have a hilariously fat head, and don’t like the feel of anything tight, so experimented with stitch count and cast on methods until I achieved my desired result. You can read more on my Ravelry project page, but the short version is I got confused between the two different methods of tubular cast on (there are two! Who knew? I mean, at least two. There could be more!) and was adjusting the stitch count unnecessarily to suit the wrong method.

The method I settled on, the long-tail tubular cast-on, takes a lot longer than the stocking stitch method, but produces a much more flexible edge which is essentially the same dimensions as the knitted fabric. As such, you don’t need as many stitches as in a cast on which draws in the fabric significantly (I’ve found – YMMV). It does produce a very flexible edge, perfect for those prone to headaches or those who want to maintain their ‘do.

Anyway, I’m not totally sold on this project. Not because I dislike the hat itself – it’s pretty darn cute – but because I’ve come to the realisation that berets really only work on me when I have a fringe to break up my forehead. As it is, I’m giving Rory Gilmore a run for the most forehead square mileage.*

I’m considering ripping it back and reknitting a tighter beanie, like the Beeswax Hat. But most likely, I’ll forget all about it, put it on one cold winter’s morning, and decide I like it just as it is. 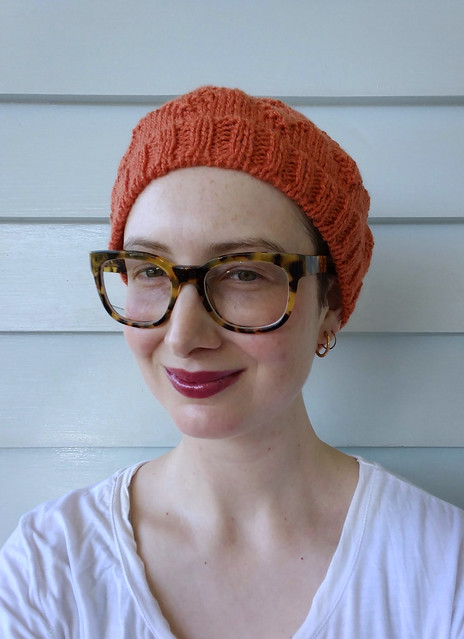 *If the Victorian government decides to implement the land tax they are considering, I’ll be up for a bomb.