After starting with fair isle hats, the next progression in my colourwork knitting was a yoked jumper. The classic style of a colourwork yoke knit in the round above a plain knit body seems to have been around forever, but it is in fact a fairly recent invention – Bohus-style jumpers appeared in Sweden c. 1940, followed by Icelandic lopi yokes (or lopapeysa) in the 1950s.* They really took off in the 60s and 70s, then as now contributing to Iceland’s national identity and tourist trade.

For my yoke, I looked no further than my HG knitwear designer, Ysolda Teague. She had both a pattern inspired by traditional Icelandic garments (Strokkur), and the required Icelandic lopi yarn as a kit in her online shop. The fact that the kit was in a colourway which may as well have been made for me (yellow and greys) cinched the deal. 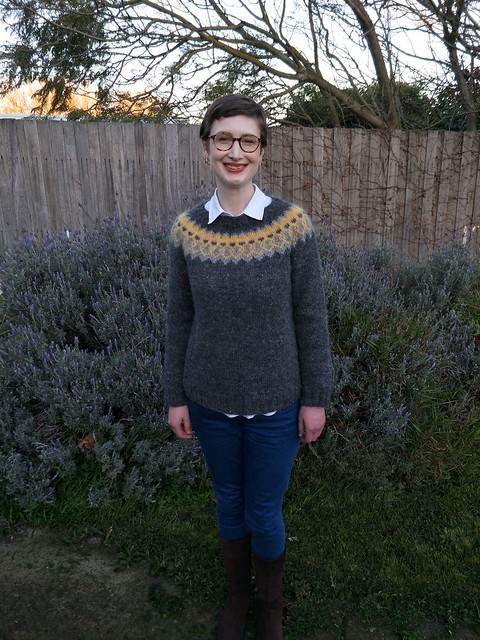 Icelandic wool is fascinating in itself. The Icelandic sheep is one of the world’s oldest breeds, being brought to Iceland by Viking settlers over 1000 years ago. Since then, they have been a protected breed with any importation of other sheep to Iceland declared illegal. So when you knit with Icelandic wool, you could well be knitting the same style of yarn an Icelandic crafter used centuries ago.**

Lopi-style yarn is a style of Icelandic yarn, a single ply, typically bulky and loosely twisted (or barely twisted at all). It contains two types of fibres, both from dual-coated primitive Icelandic sheep: fine, mohair-like thel (undercoat) and reinforcing tog (outercoat). You can see the separate fibres form a cohesive yarn in spinning.

The pattern itself, being a basic bottom-up yoke, is reasonably uncomplicated. I complicated things a little by choosing to knit top-down and replace the garter stitch bands with 2×2 ribbing. This meant that I needed a larger stitch count for the neckband cast on then a slower rate of increases to get to the yoke pattern, which was no problem as my gauge was slightly off anyway meaning calculations were inevitable. 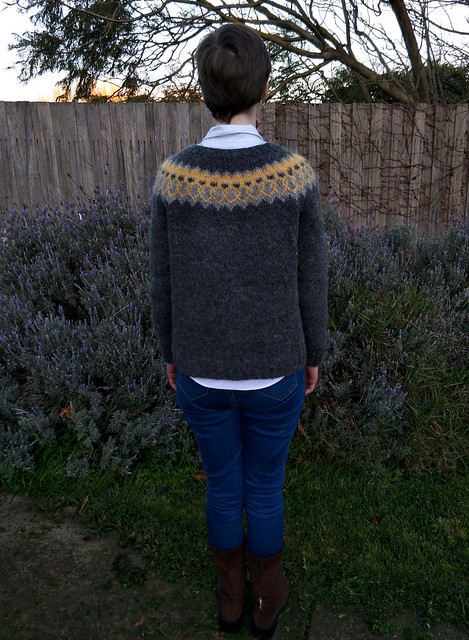 I also increased the depth of the yoke to 10″ instead of the very short 7″ of the pattern, spaced out and slowed down the sleeve shaping (which as written created a leg of mutton sleeve on me), and knit the body straight. You can read more detail on my adjustments on my Ravelry project page. Despite the adjustments it was a quick knit and I finished it in 2 months last year (besides blocking).

Unfortunately, this project was a triumph of aspirational knitting over the realistic. As much as I would like to be able to wear rustic yarns, this project proved that my body has other ideas. It took me way too long to realise that the painful eczema on my hands only flared up when knitting with rustic, non-superwash wools, and this lopi was a particularly noticeable culprit.

It’s so itchy when I wear it, I swear I can feel those damn tog fibres poking me through my shirt. I can’t wear it long for both the sake of comfort and what my exposed skin will feel like after a day’s wear!

Besides my dreams of being a rustic yarn gal dashed, I’m not really fazed as I see knitting as a process. I’ve already begun a new Strokkur in KnitPicks Wool of the Andes Superwash Worsted (oh superwash, how I missed you). I do feel like I talk a lot about how projects haven’t worked out on the blog, but it’s important to me to be honest about the not-so-great outcomes instead of raving about every project then never wearing it again.

Anyway, this is a solid pattern which would be a good entry point to knitting yokes if you haven’t tried before. I’d also recommend the lopi yarn just for the experience of knitting with a completely different fibre to what we usually see in the shops – just avoid it if you have sensitive skin! 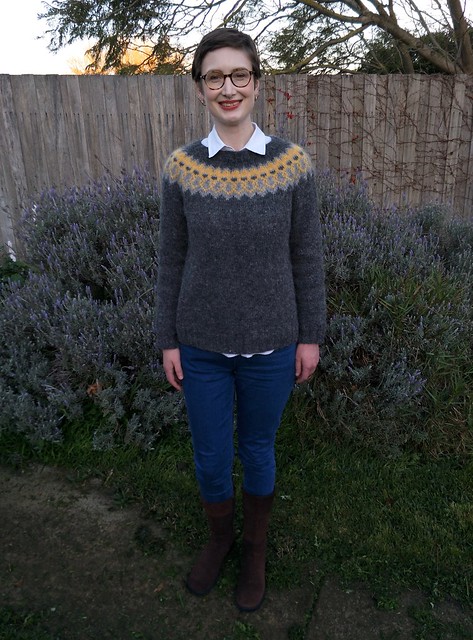 *See: Knitting in the Old Way: Designs and Techniques from Ethnic Sweaters by Priscilla A. Gibson-Roberts and Deborah Robson.

**See: The Knitter’s Book of Wool: The Ultimate Guide to Understanding, Using, and Loving this Most Fabulous Fiber by Clara Parkes. Her Craftsy course, Know Your Yarn, is utterly absorbing – I don’t think I’ve seen a more engaging presenter in many, many courses watched.