Last time, I shared with you a few dresses I’d made for my friends. I felt this particular dress deserved a post of its own.

This dress is my pièce de résistance – a knock off the Lindy Bop Ophelia dress, drafted from New Look 6773. It was made from Spotlight poly poplin. Before you ask, I am aware that Gertie produced a pattern for Butterick (5882) which is similar in style to the Ophelia. I did consider using it, but the bust piece is so small that it looks less like a design feature and more like a pair of small birds landed on the model’s chest.

Gertie is small-busted, so the pattern looks much more proportional on her. I’m not convinced it’s a style that translates well to the average body. I’ve also heard nothing but bad reports from those who have made up the pattern, mostly in relation to pieces not actually fitting together. For $20, I really like a pattern that can actually, I dunno, BE SEWN, so I decided to work on my own.

My pattern was mostly based on the principle of dart rotation. I should add that I have no training in drafting*, just a copy of Winifred Aldrich’s Metric Pattern Cutting for Womenswear and several years experience fitting patterns to my body. It was a bit cobbled together, and frankly I was surprised that it worked! I started with the strapless bodice variation of NL6773, size 14 bust and 16 waist. By trying the tissue on myself, I determined where the bust piece should sit, and drew it on the tissue. It started just outside the strap point, and travelled under the bust. Luckily Bec and I are very similar in size, but not height – so I drew the line slightly shorter than where it would hit on me.

The bust pieces were transformed into two cups, with the princess seams joined and acting as darts on either side. The darts were swung to the bottom and sides, where the cups meet the bodice, ready to become pleats. I then slashed and spread the cups 3cm, every 1.5cm, for 1cm pleats. Some of the pleats were widened to match the dart intake. I don’t have many photos of this process, but here is one of the completed pieces:

I heavily modified New Look 6773 to create a pleated shelf bust like in the Lindy Bop Ophelia dresses. I still can't believe it worked!

To construct the dress, I sandwiched a folded bias strip, cut 9cm wide, in between the cups and the bodice. A lining (Bemsilk) went on top. Some of the criticism I’d read of the Butterick pattern was directed at the straps being made of the same bias strip, causing them to stretching out rapidly. To prevent this, I seamed the bias strip at the top of the bodice with the rest of the straps, which were cut on the straight grain. They crossed over at the back (Bec’s choice) and were topstitched down for easy adjustment. This is the bodice with lining (I had to gather the underarm section slightly into a bias facing as it stretched out while handling):

The underarm sections of this bodice were a bit flappy when I tried it on. So I unpicked them 😬 and gathered them into matching satin bias tape so they laid flush to the body.

The back panels of the bodice were shirred, for good fit and to help the bodice conform to the body and not slip down. It had been a while since I’d shirred anything, and I think I made the lines too close together (6mm). 1cm would have been sufficient – and have saved thread! Due to the shirred pieces, I only attached the lining at the top of the other bodice pieces, then basted together and treated like flat lining. Hanger loops were stitched to the side seam allowances so as not to stretch the straps out in storage. 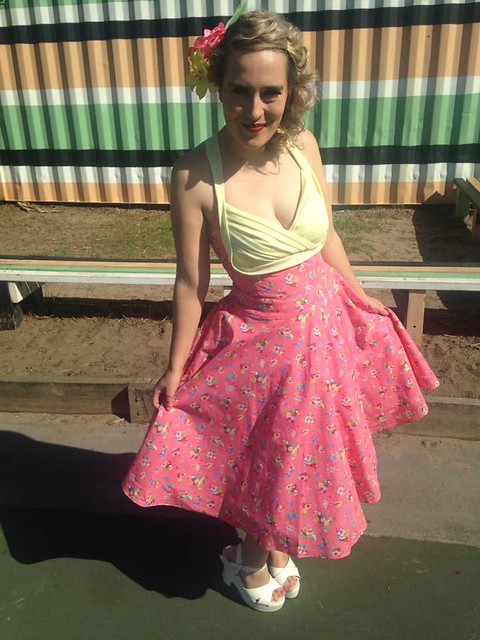 The skirt was a full circle, made from 4 pieces. Due to the cutting of the skirt, I had enough fabric left over for a matching bolero, vintage Simplicity 4930. IIRC, the pattern called for a full lining, but I just drafted facings on the go instead. 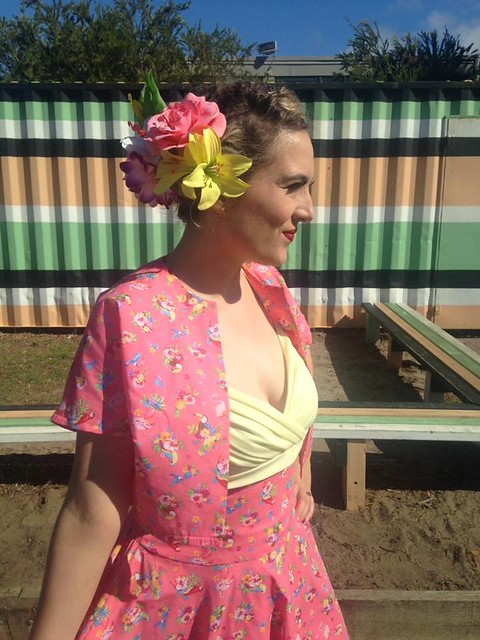 Of course, just after I’d finished the dress, Bootstrap/Lekala patterns release the exact Ophelia pattern for only $2.99USD, minus the blood, sweat and tears.

But Bec & I were both pleased with the finished results, and I amazed even myself that the bodice worked as well as it did. She wore this to a pin up comp in the city, with a hairpiece made by Miss Ivy. The colours were chosen to match the fabric – a little too clever by half! 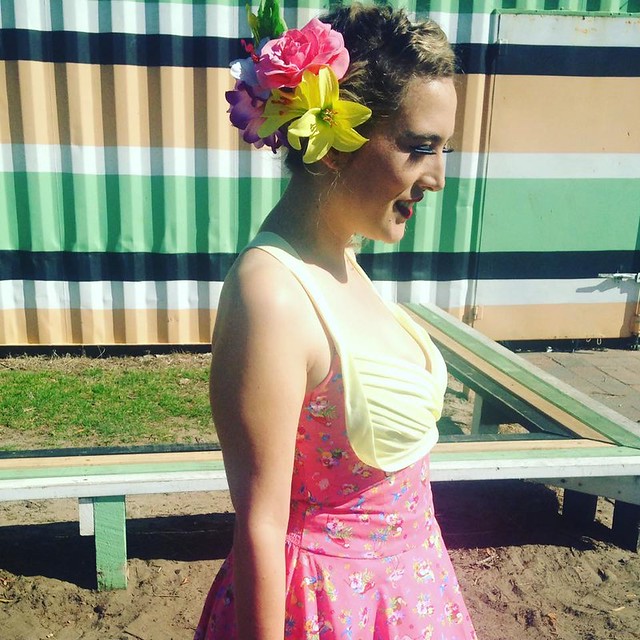 *Maybe I should start a pattern company, yuk yuk yuk